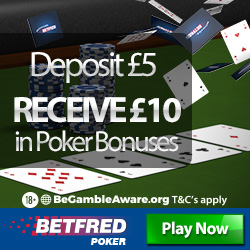 Founded in 1967, UK-based Betfred is a well-established and very popular bookmaker with more than 1,350 physical betting shops and a bustling website to match. Poker players choose Betfred Poker not only for the soft competition, but also for the brand’s reputation for excellence in client service and exciting promotions.

All new Betfred Poker customers are entitled to a welcome bonus, which is worth as much as £1,200 or €1,500. To take advantage of the offer, you must be a first-time customer, register a new and valid Betfred Poker account and make a minimum deposit of at least £5.

The Betfred Poker promotion code POKERWELCOMEBONUS should automatically populate itself on the registration form when you open your new account by clicking here!

The £5 cash bonus has a 10x wagering requirement and can be used to play the Betfred “Pokasino” games.

You should see the Betfred Poker promo code POKERENHANCED in the registration form! 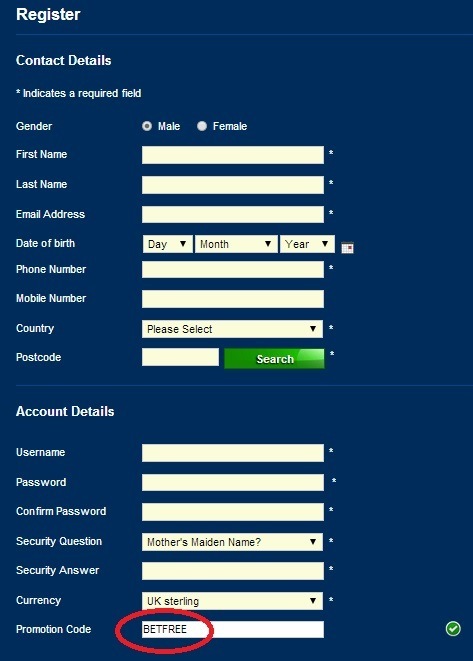 Note that VIP Points are essentially the same as the Store Points or SP explained in the VIP Club section. Betfred uses a different term when discussing bonuses in order to avoid confusion and to make it clear that SP aren’t actually consumed in the process of clearing bonuses.

All Betfred Poker clients are automatically enrolled in the VIP Club as soon as they’ve registered a valid account. As a VIP, you can earn Store Points whenever you pay cash for a tournament buy-in or contribute to a raked pot in a cash game. The rate at which you earn SP depends on your default currency: 20, 25 or 30 points for each $1, €1 or £1 spent on rakes or buy-ins, respectively.

Each month, all players begin anew in the VIP program as a Novice. Previously earned and unspent SP are still available for up to 12 months, but they just don’t count toward player rank for the current month. As players earn new SP, they’ll increase in rank as follows:

A benefit of increasing in rank as that you receive an SP boost. If, for instance, your account were boosted by 30 percent, then you would earn 28 SP per $1 spent rather than 20. Boost levels are as follows:

SP can be traded in at the Betfred store at any time. Keep in mind that since VIP bonuses apply to the earning and not the spending, there’s no advantage to sitting on points waiting for a higher VIP level. However, you’ll get exchange rates that are more favorable the more you trade in at a given time, so it can be beneficial to wait until you have enough points to reach the highest exchange tier.

You can trade SP in for tournament tokens, bonus money and cash. You can withdraw cash, but SP convert into a less favorable rate than they convert into bonus money. The default conversion rate for tournament tokens is 250 SP per €1 token, but you can improve that rate to as much as 125:1 by cashing in 25,000 SP at once. There are also £5, £10 and £25 SP freerolls that run throughout the day and that you can buy in to at the cost of 25, 50 and 150 SP, respectively.

Betfred is part of the iPoker network by Playtech. The downloadable poker client, which requires Windows, is customized to the Betfred brand, but it’s essentially still iPoker, which is a good thing. The iPoker software is a well evolved and popular poker software platform that is familiar and liked by most online poker players.

Another good thing that is a recent development of the iPoker platform is that iPoker has eliminated the concept of tiers among its poker operators. What this means is that iPoker now pools ALL its poker players into a single network, instead of compartmentalizing certain players into separate tiers such that players in different tiers were unable to play against each other. Betfred was once a tier two operator, but no longer, and as a Betfred customer, you’ll have full access to the iPoker player pool.

This means better and bigger tournaments, more cash games, and a greater variety of games available. More action, the better! 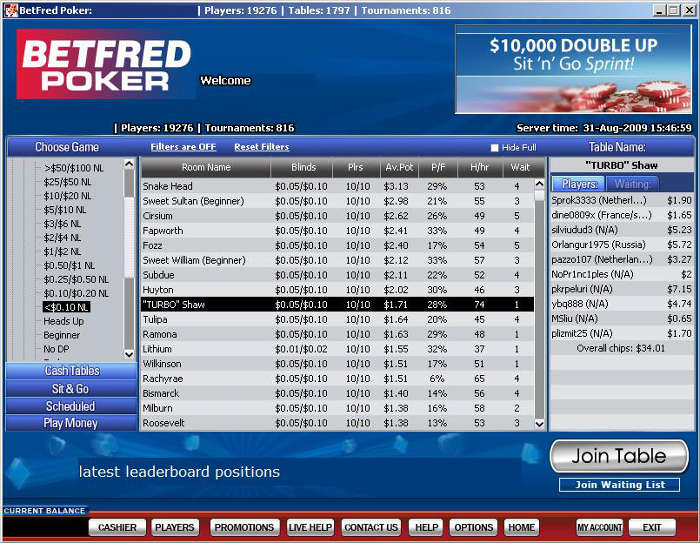 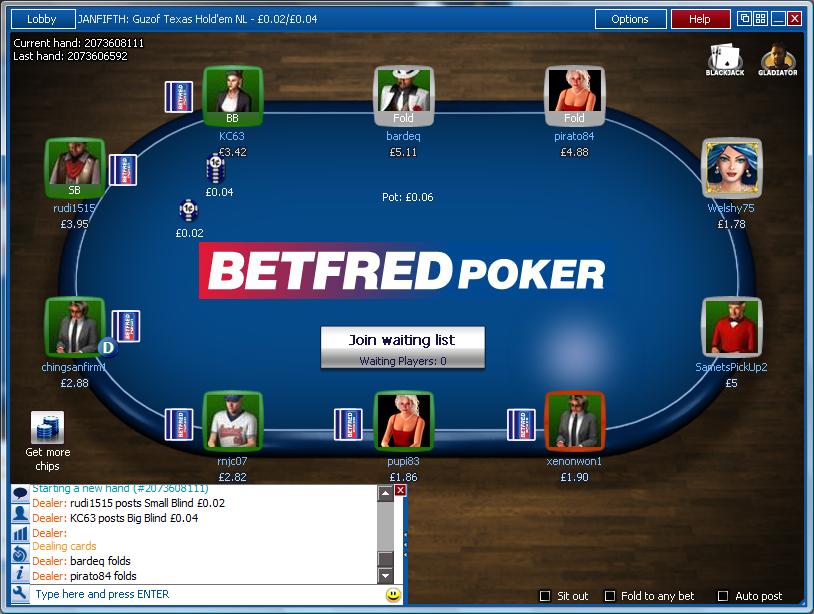 The Betfred iPoker client supports a great deal of customization. It has powerful search and sort tools for finding particular games. It has a Quick Seat feature, which will get you into an appropriate ring game in seconds, or you can jump into Speed Poker at any time and just as fast.

Multi-table support is excellent, and you can have up to 16 tables open at a time.

Join Betfred and enjoy some poker!